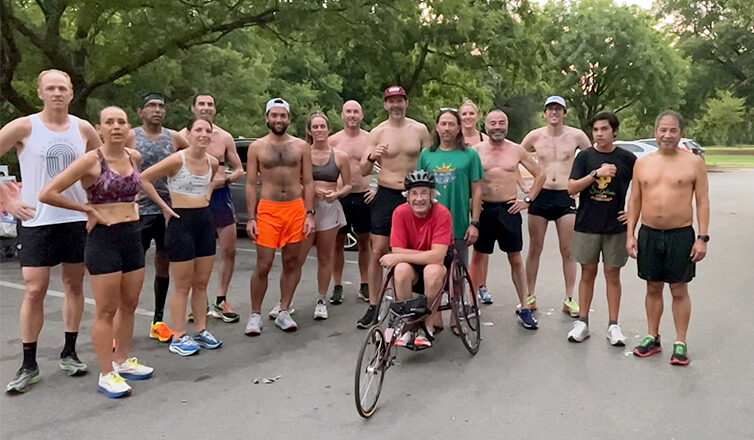 At first, the diagnosis of amyotrophic lateral sclerosis (commonly referred to as ALS) seemed nothing short of devastating. Austin resident and athlete Bill Corrigan (62 years old) had trained and completed 11 full marathons and was graciously ready for all that was still to come in life. After he noticed himself tripping without any reason, he ended up in the office of Dr. Shailesh Reddy. With targeted blood testing and an EMG test that measures your muscle’s electrical activity, the diagnosis was confirmed in early February of this year.

The typically happy and upbeat Bill was initially shocked, scared, and numb… about what that meant for him, his life, his family, and his friends. However, after a few days of processing the unwelcome reality, he began to take in the unwavering support of his wife and loved ones to transform his diagnosis into an opportunity to adapt and overcome. He decided that “things are going to happen in life, so why would I ever change my attitude”? Determined to forge a new path for these sudden changes, Bill decided to take his athletic lifestyle and passion for running to different levels. He even curated a bucket list, which includes trips to Dublin and hiking Machu Picchu (the latter of which he and his wife recently completed)!

After qualifying for the Boston Marathon over a year ago, Bill still showed up to this northeast milestone and walked four miles. Even though he did not complete the entire race, the lesson stood in his ability to be there and participate. This is the impenetrable attitude that has Bill now training for a marathon in London, taking place in just a few months. However, this time he trades his two feet for three wheels… and a whole lot of new navigation skills he is learning.

The transition to a wheelchair has not been simple or easy, but Bill has nevertheless accepted the challenge. Dr. Reddy’s background in physical medicine and rehabilitation included previous work with adaptive athletes which allowed him to recognize Bill’s unique situation. He was able to connect Bill with a colleague in the area who specializes in adaptive sports medicine. In his words, Bill wants to “use it until I lose it”. He does this by staying active with the working parts of his body as the neurodegenerative disease predominantly affects the muscle control in his lower limbs. To train for his upcoming feat across the pond, Bill is working with para-athlete and gold medalist Saul Mendoza.

Stories like Bill’s are what drive us to further research and clinical trials that contribute expertise in neuromuscular and electrodiagnostic medicine. With our wide range of diagnostic tools, we can cover the breadth of neuromuscular diseases, including ALS. We believe that the management of this disease requires treatment by different specialties to allow for holistic care for every one of our patients. Learn more about our ALS Clinic and our team of providers, by contacting us today.