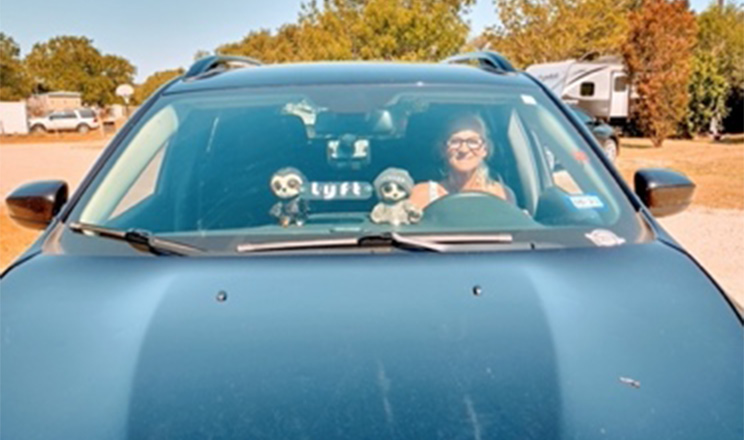 A few days a week, Kelly Kelley is a ride share driver in Austin. She loves striking up conversations with her passengers, especially when she can talk about her stuffed animal sloths on her dashboard. She has them because she says they’re symbolic of her life, now that she’s battling a rare neuromuscular disorder called Pompe Disease. Sloths are known for being slow and sluggish –which is how she often feels because of her disorder. But she is still able to maintain a sense of humor about it.

Pompe disease is a rare genetic neuromuscular disorder in which the body isn’t able to break down complex sugars, which affects organs and tissues, especially muscles. There are three kinds of Pompe disease, according to rarediseases.org including:

In 2015, after years of testing and hospitalizations, her disease progressed, but she still didn’t have a definite diagnosis, until she met Dr. Yessar Hussain, who is board certified in neurology, neuromuscular medicine, electrodiagnostic medicine, and clinical neuromuscular pathology.

After extensive testing that included a muscle biopsy and blood tests, Dr. Hussain diagnosed her with Pompe Disease. By this point, she was in a wheelchair and was extremely weak.

Currently, there is no cure for Pompe Disease but treatment for the symptoms include enzyme replacement therapy. The therapy consists of injecting alpha-glucosidase directly into her bloodstream. This allows her body to break down glycogen stores and prevent toxic buildup in her cells, which alleviates her symptoms and slows down the progression of her disease. Kelly, and other Pompe disease patients, will need this kind of therapy for the rest of her life. She’s been getting this therapy at Austin Neuromuscular’s infusion center for six years.

And while the initial enzyme therapy helped her symptoms, the treatment no longer provides the relief it once did. Her disease has progressed to the point where it’s affecting her heart, lungs, and diaphragm, so she must sleep in a recliner at a 45-degree angle. Kelly recently started a new experimental enzyme therapy at Austin Neuromuscular Infusion Center that she hopes will slow the progression of her disease.

Kelly never misses a chance to educate others about Pompe Disease, including the importance of newborn screening. According to the Texas State Department of Health Services, Texas does not currently test newborns for Pompe Disease. Kelly says a simple blood test can detect the disorder and early intervention could make a world of difference.

In the meantime, Kelly says Dr. Hussain has saved her life by providing these treatments that allow her to be out of a wheelchair, although she still needs leg braces and a cane for support. But she’s thankful for the time she can now spend with her family and says she lives each day like it’s her last.

We continue to be amazed at Kelly’s motivation and perseverance!